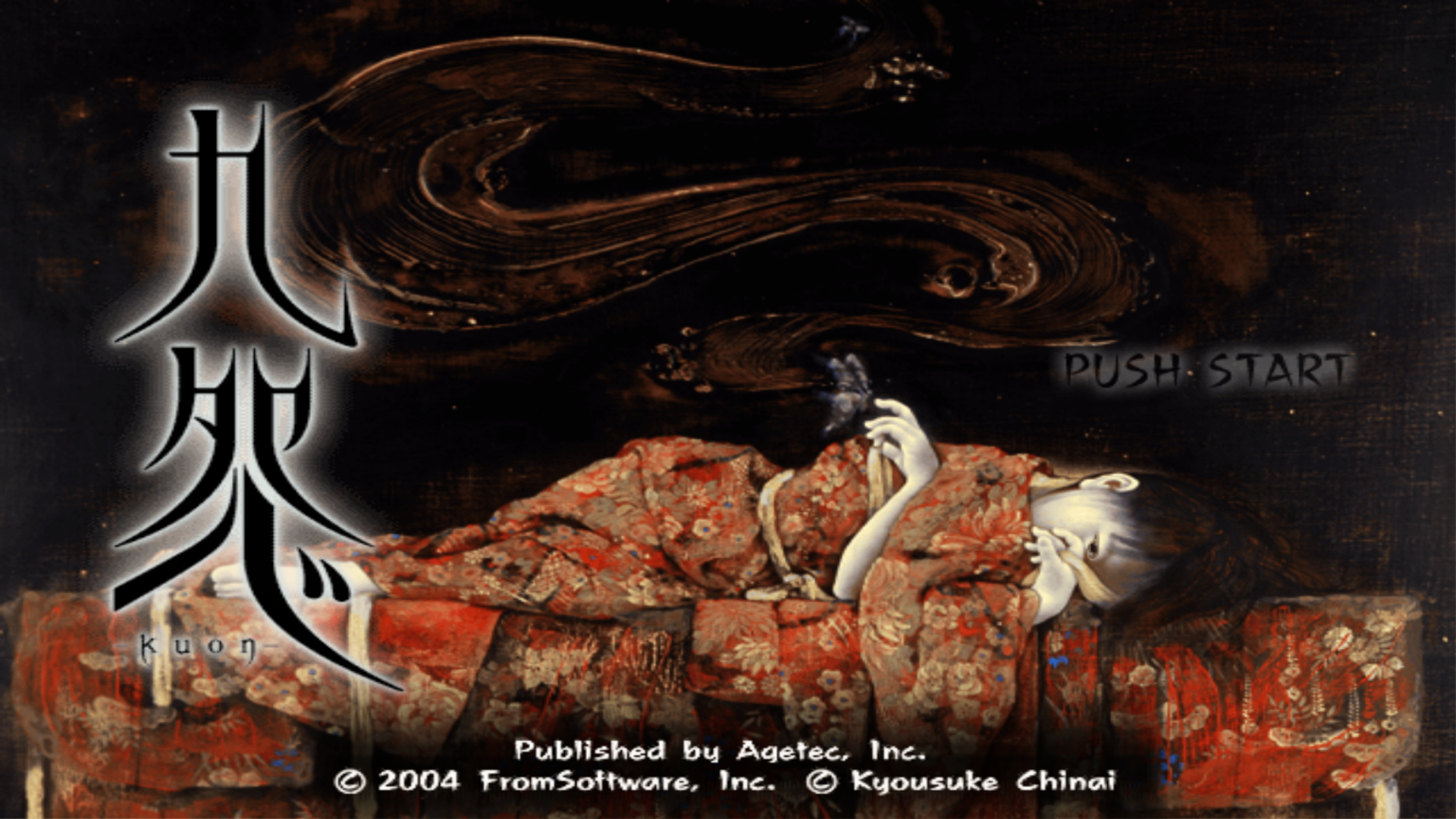 My friends know that I’m a big Dark Souls fans. I’ve put hundreds of hours into each title, and I consider the original Dark Souls one of the best games ever made. So you can imagine how excited I was when I learned FromSoftware, the company behind Dark Souls, developed a survival horror game for the PS2: Kuon.

I was shocked I had never heard of this game, and not just because it was a FromSoftware title. I love horror games, especially from the PS1/PS2 era. I’ve recently been revisiting some of my favorites, like the Resident Evil and Silent Hill games, but also revisiting more obscure horror games that I wanted to give a second chance, like Haunting Ground and Rule of Rose. I also played a few for the first time like Dino Crisis 2 and Parasite Eve. More on that another time.

I had never heard of Kuon until recently and for good reason. The game did not score particularly well, and had a limited release outside Japan. Part of the reason for its critical and commercial failure was it released alongside Resident Evil 4, the blockbuster title that changed the survival horror game landscape for years to come. Compared to RE4, Kuon’s gameplay seemed dated to critics.

What is Kuon? Kuon is a survival horror game set in a mansion in Kyoto around the Heian period. The story is based heavily in classic Japanese horror, a form of story known as a kaidan.

When starting a new game, you can choose the Yin or Yang scenario. The Yin scenario has you play as Utsuki, a shrine maiden, searching for her father in a haunted manor. The Yang scenario has you play as Sakuya, a female exorcist, also investigating the haunted manor. Both scenarios play out differently similar to how the Resident Evil 2 scenarios were originally handled, but you will retread a lot of the same areas.

There is also a third scenario that unlocks after you complete both Yin and Yang scenarios.

Kuon plays very similarly to other survival horror games of the era. You’ll be exploring an interconnected environment, finding key items and solving puzzles to progress. You’ll also be combatting undead monsters using both melee attacks and spells. Spells can be found scattered throughout the environment, and can be assigned to the square or triangle buttons. You can either cast a ranged attack spell, or summon a familiar to aid you in battle.

Combat is very basic. The melee attacks don’t do much damage, and leave you open to attack and being grabbed. You can heal using items in the menu or by meditating. When meditating your summoned creature will disappear leaving you open to attack. You will also suffer from vertigo sometimes when running or surprised by the undead, making the screen all wavy and preventing you from casting spells until you regain your composure.

Using a familiar as a barrier and attacking from afar is the most effective way to deal with stronger enemies. Most enemies won’t require this though. Going in and out of the menu is a hassle, as the spells are two menus deep. A faster way to equip spells would have been a nice feature. Also you can only use melee if no spells are equipped, which is frustrating. I’m not sure why holding down a button to take out your melee weapon wasn’t implemented. Sometimes you want to use your melee weapon to finish off a downed enemy to get the item they drop rather than waste a spell. Spells in the game are finite, and if you run out you can be in a bad situation with only your melee attack.

The exploration of the haunted manor and surrounding area is fun the first time. You’re mainly blocked by seals that you need to find a “key” for to unlock. There is not a lot of clear direction at points of the game which encourages exploring each room. My main complaint is that sometimes events trigger for seemingly no reason after exploring a different section of the environment. Some of my favorite aspects of the original Resident Evil was exploring and learning the layout of the Mansion, and surrounding area, and in that respect I enjoyed exploring the manor. The map is very detailed, once you find it, and helps facilitate exploration. The Yin and Yang scenarios retread a lot of the same areas, and even have the same puzzles, which is kind of lazy.

The actual game looks great for PS2 era. I switched over to Japanese voice acting to fit the setting, but there is an English dub as well. The models don’t move their mouth when talking which is a bit strange for a PS2 game. Enemies look good, but there is not a ton of variation in the types of monsters you’ll face. There’s undead humans, these goblin like creatures called Gaki, a Merman monster, and these creepy cocoon human creatures. There are also a few unique boss enemies I won’t spoil.

The narrative is based on ancient Japanese folklore, which makes it really novel for a Western audience. Cutscenes are sparse, and much of the narrative is told through diaries and writings you’ll find scattered throughout the environment. Each scenario fills in more of the story and by the end you’ll have a full picture of the events at the Manor.

Kuon is a forgotten gem from the survival horror and FromSoftware annals. It feels like a low budget title but it’s worth playing for its unique narrative and setting.

Finding a physical copy for an affordable price is near impossible, so I’d recommend emulating it if you’re interested.