PlayerUnknown’s Battlegrounds is one of the most terribly optimized and laggy games I’ve played in recent years. It’s been in Early Access since it’s launch back in March 2017 and only just came out in 1.0 Dec 20th. By then, I had already invested +100 hours in playing the game, and just as much time in watching Twitch streamers like Shroud and DrDisrespect carve up “chubby cheek, blonde bang punk kids”. It’s had the lowest lows, but also the highest highs of any game I’ve ever played.

So what makes PUBG so special? Why has it become the worldwide phenomenon with over 1M concurrent players last month? Until recently, Battle Royale games were just mods for open world survival FPS games like Arma and now everyone is scrambling to fit a BR mode into their already established titles. I’ve seen a few of the competition but none come close to achieving what PUBG does. I’m not going to do an in-depth analysis of why PUBG is so popular, but I will breakdown what I consider the best elements of the game.

Until recently, tech wasn’t at a place where you could have 100 players occupying the same space in a FPS. Most modern FPS use realistic physics, and the world needs to respond not just to player’s physics but also projectiles and vehicles. Now the infrastructure is getting to the point where these types of games are more playable, although latency will still be an issue until google fiber is universal.

Being 1 of 100 other players is intimidating but because you get to choose where you parachute out of the plane, you’ll never all be in the same space. Exception being when I encountered a glitch in the test server where everyone was ejected from the plane at once and a lagfest ensued.

Surviving a game with 99 other players is insanely difficult, making PUBG the most difficult game I’ve ever played (sorry Dark Souls and Cuphead). Even if you are good at FPS, you need to play this game much differently than you would a  TF2 or Overwatch. You only have one life, so if you die you’re out of the game and it’s back to the lobby to queue up again. This raises the stakes considerably, since a full match can last about 30 minutes.

Death can be around every corner. It requires you to be both hyper vigilant and tactical about how you approach situations, making it far more interesting than most FPS games.

There are many random factors that make each PUBG game feel completely different. The first is the path of the plane, which will fly in one direction over the map, but will always approach from a different angle. This will determine which areas players will prioritize dropping in. If the plane flies over an area that is known to have good loot, you can be sure most of the players will drop there (and be dead in the first 10 minutes of the game).

While the map stays the same (there are only 2 different maps right now), the loot spawns randomize every game. This makes the early game a desperate scramble to find a decent weapon and armor. It can be frustrating when you run into a house and come out with nothing but a pistol. On the flipside, it’s exhilarating when you find an assault rifle in the first seconds and just start mowing players down.

Vehicle spawns are also random, in addition to the other items (medkits, attachments, etc..). And there are loot crates that drop periodically somewhere within the circle. What’s in the loot crate is also random, but it’s usually high tier equipment, and there a few weapons that can only spawn in a crate like the much sought after AWM or Groza. All these random factors make each game feel fresh, and exciting.

Play at your own Pace

The pacing is the what makes PUBG so good. The best part is it’s mostly up to the player. Do you want to drop into a highly contested area and duke it out in the early game for the chance of better equipment, or land in the outskirts of the playing field and slowly loot your way up while avoiding conflicts? You can technically find a bathroom inside the circle and just hide in the tub until the late game and still win.

When I first started playing, PUBG felt more like a horror game. I would get a weapon and just hide in a house, nervous that there might be a someone lurking outside waiting to shotgun me at point blank or snipe me from a hill. I would go prone in fields near the end game, too nervous to actually engage other players. Once I got more confident, I started taking more risks. With 100+ hours in the game, I now feel confident in my shooting abilities, and will run through contested areas and open fields, looking for other players to kill. Instead of being easy prey, I now am the hunter looking to catch other players unawares. Even in late game, I’ll take shots at players even though it’s best to remain hidden and let the herd thin itself out.

After the initial shootouts, there is always a lull in the mid-game, where you won’t encounter many other players. Sometimes it can be downright boring as you drive around the map trying to find other players to engage. It can be extra frustrating when you get picked off not knowing where your assailant was after several minutes of nothing. But this lull builds anticipation, and if you manage to survive to the late game, you’ll be on the edge of your seat, trying to spot the few remaining players in an ever decreasing circle.

As you play the game, a death circle closes in on the players, herding them all into smaller and smaller playspaces. The early circle shrinks very slowly, and if you’re caught outside the circle, you won’t take much damage. In the late game, the circle closes much faster, and falling outside the circle can be lethal. You’ll often be put in tight situations, where you need to run to a spot inside the circle, even if it exposes you to enemy attack. You’ll constantly be making decisions like this, as the circle shrinks to the point where there is nowhere else to hide.

In my gaming career, there have been many highlights but none that seemed as impactful as the first time I won a Chicken Dinner aka killed the last remaining player. I had played the game 100+ hours before I won my first dinner. I can remember everything leading up to the final moments. I was prone in a field with 2 other players, with a Scar assault rifle and Mini 14 sniper. I spotted one of the players but could see he hadn’t spotted me. I debated whether to engage him when he suddenly started shooting at the other player. I hesitated to attack until he suddenly turned towards me. Panicked, I opened fire with my assault rifle, not entirely able to see him from my vantage point. Suddenly, the overlay appeared as my gun continued to fire haphazardly. I had won. 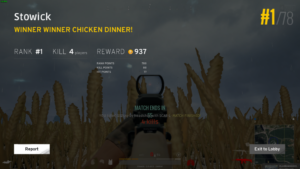 I was so excited I screamed. Every top 10 game situation is an adrenaline rush. As you realize you’re nearing the end game and have a shot at winning, your heart rate begins to escalate and your mind sharpens. I’ve won 3 dinners now, with dozens more close wins, and it still happens every time.

What game can you think of that could illicit such an emotional response? Not too many. Being able to say you won a PUBG game feels like a huge personal achievement. If you’ve played PUBG, you know how difficult the game is. Obviously it varies but you never know the skill level of the other players. For example, my 2nd game I won because the player I was approaching accidentally killed himself with a grenade. The 3rd game I won the player was prone in the grass and never fired back at me.

Now that I’ve won a few dinners, I mostly play for fun and kills. This is the way I’d recommend playing the game, because if you play to win you’re going to get very frustrated like I did.

To quickly review PUBG succeeds because:

Now that my friends are playing it, the game is even more fun, as I bring my lessons from solo to duos and squads. Playing with other players is a totally different feel, as you have to call out where enemies are on the compass and make plays together. You can also save your friends if they get downed before they die, meaning you get an extra chance if someone surprises you instead of dying immediately like in solo. It’s much more fun and the recommended way to play. Although relying on your own skills is still enjoyable as well.

PUBG is not going anywhere and will only get better as the year progresses, and the devs continue to make improvements and add new maps. It’s a good time to get in now as the game plays better than it ever has. Just try not to get too addicted. If you’re an adrenaline junkie, like I am apparently, you won’t want to stop after that first taste of victory.