What We Can Learn From Classic Arcade Games

I recently completed another pilgrimage to the holy land of classic gaming — Laconia, New Hampshire. This small, lakeside town really comes alive in the summer as people from the city travel up there to escape the heat and enjoy water fun on Lake Winnipesaukee. There is also one other small feature of Laconia that keeps me coming back again and again. It happens to be home of the Largest Classic Arcade in the World.

I first learned about Funspot in the documentary King of Kong: A Fistful of Quarters. I was born in 1985, the year the NES first came to America, so I had already missed the boat on the Golden Age of Arcade Games. By the time I was 4 and owned my first NES, the home console game scene was all I knew. It was a great time to be a gamer and I grew up on some of the best games ever made: Super Mario Bros, Legend of Zelda, Mega Man. It just didn’t get any better.

My dad was never much of a gamer, but he loved to play Pac-Man. He used to play it on the arcade cabinet back when he lived in Italy, and he would hijack my NES to play it occasionally (he still plays Pac-Man CE on his Xbox Arcade every day).

Arcade games for me were mostly restricted to movie theaters and Chuck E Cheeses. While I really enjoyed those games, particularly the TMNT beat-em up, these were late 80s-early 90s arcade machines. I still never experienced the classics like Space Invaders or Donkey Kong. Those machines just weren’t around anymore.

When I saw there was an arcade that had all these classic arcade machines, I knew I had to go there. I live in Connecticut fortunately so driving to Laconia was just a 3 1/2 hour drive. The first time I went up there, I was hooked! There were more coin-op machines then one could play in a week, let alone a weekend. Driving up to Laconia would become an annual trip for me and my friends.

Playing these classic arcade games wasn’t only a fun nostalgic trip (for a time I never lived through mind you), but also a great learning experience as a game designer. These arcade games established the fundamental design that we still see in most modern games. They are oft forgotten by the younger generation of game designers, but in fact, these games have made a huge comeback in recent years. Mobile, or casual games as they’re often referred to, harken back to the simple, addictive gameplay loops of the classic arcade era. These bite-size games are designed for short sessions instead of the longform games we often play on our home consoles. There’s typically little to no narrative. Instead, the games focus almost entirely on tightly crafted gameplay loops that keeps the players craving more. 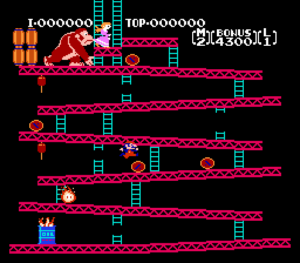 Let’s look at a classic arcade game like Donkey Kong. Donkey Kong starts with a short cutscene at the beginning showing the giant ape climbing up to the stage with Pauline in tow. He then jumps a few times causing the platforms to become slanted and let’s out a digital laugh. Stage 1 starts with Mario at the bottom of the stage and nowhere to go but to the right. To the left of him is a barrel that shoots out fire enemies which urges the player to move quickly. Donkey Kong starts rolling barrels down the stage which can randomly fall down the ladders or keep rolling to the end of the platform. With no way to go but up, the player must reach Pauline who has a “HELP” bubble while dodging hazardous barrels and enemies. There are 4 stages, and once the player completes them, they are rewarded with a cutscene of Donkey Kong falling on his head, and Mario and Pauline reunite (with a little heart above them). Then the game repeats until the player loses all their lives.

THIS is all a game needs to be compelling. Donkey Kong is still one of the best arcade games ever. It has great theming, simple but challenging play and clear goals. Once the player masters the basic game, they can then compete for high scores like in King of Kong.

Donkey Kong quickly teaches the player how to play the game. There’s no “arrows” or text bubbles that appear telling you what you need to do in-game. Most arcade machines only have a demo that shows basic play instructions or they have the instructions on the cabinet itself next to the controls. The simpler the better in most cases. These games are very intuitive and just challenging enough to be inviting to new players but also compelling enough for advanced players. 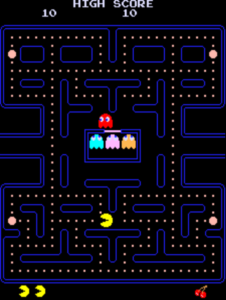 There’s much more I’d like to write about these coin-op video entertainment cabinets. But for now, I’ll leave you with a list of why I LOVE classic arcade games and why I think it’s important new game designers play them.

WHY I LOVE CLASSIC ARCADE GAMES

What do you think of classic arcade games? Do you still think they have relevance in modern game design? If you’ve played some of these early machines, what was your favorites? What did you like about them? Let us know in the comments!

One Reply to “What We Can Learn From Classic Arcade Games”